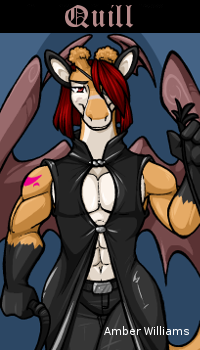 Quill is a member of the Taun Clan and is head of the combat department at SAIA[1]. She appears to have a romantic interest in Jakob, though this may have been a feint to prevent Jakob interviewing Dan immediately on his arrival.

Quill is a lineal descendant of Taun and is considered quite old even among 'Cubi.

Her clan marking is located on her right shoulder, easily visible in her first comic appearance.

Community content is available under CC-BY-SA unless otherwise noted.
Advertisement